The Tale of an Indian Mother

This post has been published by me as a part of the Blog-a-Ton 30; the thirtieth edition of the online marathon of Bloggers; where we decide and we write. To be part of the next edition, visit and start following Blog-a-Ton. 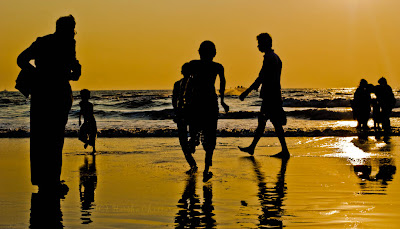 The strong brakish wind made her open hair slap across her cheek. Meera was sitting on the sand, with her chin resting on her folded knees. The sea was one of the very few things in America that Meera loved.

She recollected the days when she and cousin Sarala would spend hours in their North Calcutta home, listening to the sea by placing conch shells to their ears, that their neighbour Aunt Gauri had brought back from her visit to a beach. For a very long time, the two young girls believed that the shell could connect you to the sea. Meera had never seen the sea until until she got married to Bikash and moved to America with him.

The beach was crowded, today﻿ being a Saturday. It was bustling with people and their activities. But Meera seemed to be oblivious of her surrounding. Sitting at a distance from the sea, she stared blankly across the vastness, as two tears descended slowly down her flushed cheeks, to wet the red dupatta that was placed across her knees.

The amniocentesis report was due today. A pale-faced Meera was jittery since morning. Her swelled up feet looked even more bloated up. She was sitting up on the bed with pillows under her feet, embroidering tiny yellow roses on a white baby dress, when Bikash came into the room. He was getting ready for work.

"Will you be as happy if it is a girl", Meera's voice was smooth as she directed her question to her husband, not looking up from her work.

Bikash came up to her, cupped her face with both his hands and planted a soft kiss on her forehead.

"Is that why you are so worried? Of course I will love our child, be it a boy or a girl".

Meera felt slightly better. "And what about Ma and Baba?". She meant her in-laws.

"I'm sure they will be as happy too, Meera", Bikash replied, while tucking in his wallet and handkerchief into his pocket. "That is why Ma wants to come and stay with us during the delivery. To help you once the baby comes."

Meera suddenly felt better. Her in-laws were orthodox Brahmins and she always had an inkling that it was their desire that Bikash, being the eldest son of the family, gifted them with a grandson. But Bikash's words turned her fears volatile.

"I'll pick up the reports on my way back. Take care of yourself Meera, and reach me if anything is urgent", Bikash kissed her again and left for the state university, where he worked as the librarian.

Afternoons were lonely for Meera and she would often re-wind her days back to when she was in Calcutta. She came from old North Calcutta house, which had a big black iron gate with a durwan, a small garden that maali kaka used to attend to once in a month, a long verandah with red flooring and a thick black border, which would be bathed daily by the slanting rays of the evening sun. Meera and Sarala could be found in this verandah every afternoon, playing or reading books borrowed from the local library. As the sun would go down, Anju Pishi would sit with them, comb their waist long hair, oil them well and tie them into tight pig tails. Anju Pishi  was their father's widowed sister who stayed with them and took care of the two girls like the daughters she never had.

Soon after Meera finished her college, her match was fixed with Bikash. Sarala and Meera giggled over the black and white photograph that Bikash's family had sent. The groom was working in America, and would come down only to get married. Bikash's family was among the well known Brahmin families in Burdwan, with their own three-storeyed house and a first hand Ambassador car.

"Meera has a golden luck to get such a groom," neighbours and relatives claimed.

In less than six months after the match was fixed, Meera found herself married, and bidding farewell to her family, to her country, to fly to an unknown land with an unknown man.

Bikash's apartment was a disappointment when Meera had first walked in. Bachelorhood spelled all over.It took Meera a few weeks to settle down and convert the house to a home. Bikash seemed to be a nice man. He was happy the way Meera had decorated the house. He taught Meera how to go about the streets of America, explained how to use the microwave and the washing machine. He took her to the Indian grocery store and bought her all the spices and condiments that she wanted to have.

Bikash took good care of her. Sometimes bought her Chinese from her favourite restaurant, bought her books to read, did not shout at her if she over talked by a couple of minutes when she called her Mother or Sarala or Anju Pishi. But she liked it the best when Bikash took her to the beach.

Initially she would come to the beach with Bikash on the weekends. They would walk by the water, letting the cool water kiss their feet, she would collect shells and put them in silver box she had got as a wedding present. She would sometimes send some of the beautiful shells to Sarala, who still had not seen the sea. They would see the kids playing in the water, splashing and plunging in and out of the sea, which was now a vast unending bed of gold, with the sun getting engulfed by the horizon.

When Meera gradually got acquainted with the city, she would visit the beach each time she felt sad or lonely. The untiring, enending sea would always lift up her mood.

It was almost evening when Meera woke up from her afternoon slumber. She had overslept by an hour. ﻿She folded the washed clothes neatly, lit the incense in front of the framed picture of Goddess Durga and told her evening prayers. She combed her hair neatly, retouched the vermillion in the parting of her hair and waited for Bikash to arrive with the reports. In the silence of the room, she could almost hear her own heart racing.

She picked up her sewing and got so engrossed that she didn't realise it was past the time Bikash was expected. When she realised, it was almost nine in the black and gold clock on the grey wall. Meera was worried. Bikash should have been here by now.

"Is it the reports?", she wondered. "Is my baby not healthy? Is Bikash scared to break the truth to me?"

Meera turned restless. She splashed some cold water on her face and as she was about to go and stand in the balcony from where she could see the gate, Bikash entered, unlocking the door with his set of keys.

"Very unlike of Bikash," thought Meera.

She did not like the look on Bikash's face. She knew things had gone horribly wrong. Meera could smell the sea. Bikash had been to the beach. She knew what that meant. Bikash was upset about something.

"What is it, Bikash?" she asked, her voice trembled slightly. "What do the reports say? Is the baby fine?"

"Yes Meera, the baby is healthy and fine."

Meera heaved a sigh of relief. She turned back to go to the kitchen to heat the dinner, when Bikash spoke again.

Meera swirled back, with a beaming smile. She touched her bulging belly with passion. She hugged Bikash, but his cold attitude surprised her.

"What is it? Are you not happy? We talked about this so many times and you were always fine with it. What is it now?" Meera threw all her questions almost in one breath.

"I am fine Meera. Just that Ma is unhappy. She wants you to go for an abortion and try again."

Suddenly the world around Meera turned bleak. She could feel getting swallowed by nothingness. Bikash's voice seem to come from somewhere far.

"Ma has refused to come here. Think about it Meera, we can try again for a son."

Meera didn't know what Bikash had for dinner that night, she had bolted the door behind her and cried to sleep.

As she sat on the sea shore, with uncontrollable tears, a small girl came and hugged her from behind.

"Ma... see, what I got." She had some sandy shells cupped between her tiny palms.

Surprised, Meera looked at the kid.

"She cant't be more than two," Meera thought.

Deep black eyes, with black soft silky curls, Meera felt she was looking into the face of a cherub. She had mistaken Meera to be her mother. She ran away, the moment she realised her mistake. Meera smiled. The sound of  "Ma" kept ringing in her ears, even after the girl was out of her sight.

The evening had almost set in. The golden-orange hue had become a tint darker. The sea and sky was gradually dissolving with each other at the horizon.

"Sayantani - that's what I shall call her," decided Meera. Sayantani means twilight, someone that belongs to the evening.

She got up from the sand, dusted her salwar kameez and started walking back to her apartment.
She had to comeplete embroidering the yellow roses for her daughter.

The fellow Blog-a-Tonics who took part in this Blog-a-Ton and links to their respective posts can be checked here. To be part of the next edition, visit and start following Blog-a-Ton.